Why We Should Embrace Mistakes in School

When my daughter was a toddler, I regularly spilled milk in front of her during meal time. “Oops, oh well, no big deal, let’s clean it up!!” I would say in my high-pitched, goofy mom voice.

Before she could speak, I sensed that she was wired for perfectionism (something very familiar to me), so I attempted to normalize day-to-day mistakes and to show her how easy it was to bounce back from them. 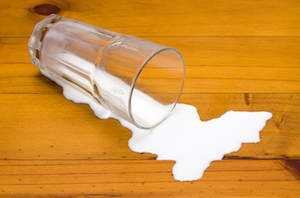 We’re in the thick of the spilled-milk journey right now—learning to accept and embrace mistakes on a larger scale. Now that she is 13 years old, I am all the more sensitized to how she responds to mistakes at school, in particular—and how they enhance or detract from her learning.

For many teens, perceived faults loom large as their self-consciousness grows. Theorist David Elkind’s classic description of an adolescent’s sense of an “imaginary audience” may not be so imaginary these days. Kids are watching each other closely both in school and online—judging, comparing, and evaluating—while mental health conditions like anxiety and depression are on the rise.

Our performance-based school culture may not be helping, but there is an alternative—and it involves guiding our students to embrace the very failures they’re trying to avoid.

Mistakes help us to learn

In her 2017 paper “Learning from Errors,” psychologist Janet Metcalfe claims that avoiding and ignoring mistakes at school appears to be the rule in American classrooms—and it may be holding back our education system. Drawing on research, she argues that students may actually benefit from making mistakes (and correcting them) rather than avoiding them at all costs.

Focus on errors; don’t ignore them: Only a few studies can shed light on how teachers respond to mistakes in the classroom. One famous study of mathematics classrooms in a variety of countries revealed a marked difference between the instructional strategies in Japan versus the United States.

Videotapes showed that American teachers focused on the correct procedures for solving problems—primarily ignoring errors and praising students for correct answers only. Japanese teachers, on the other hand, rarely praised their students and asked them to solve problems on their own. Then, they led discussions of common errors as students explored a variety of pathways to both correct and incorrect solutions.

Because Japanese students outperform U.S. students in math, it’s worth taking note of this contrast. Japanese teachers seem to be embracing the learning struggle by acknowledging mistakes rather than ignoring them.

Real learning isn’t usually easy. Teaching methods that center on errors may make learning more challenging but can also be more motivating—potentially enhancing metacognition (the ability to think about your thinking) and self-efficacy (a belief in your capability to accomplish a task).

In the direct instruction group, students learned to solve complex math problems with the teacher helping them along the way. In the productive failure group, however, students struggled and failed at solving problems until the teacher stepped in to help them analyze their failed attempts and find the correct solution.

As a result, the productive failure group outscored the direct instruction group on both simpler and more complex problems during a final test. Further, groups of students who demonstrated multiple approaches to solving problems were also more successful than those who did not.

In addition to understanding the different ways you might err, it seems helpful to actually make errors in the first place.

Be confident and be wrong: If productive failure appears to enhance learning, so does overconfidence. Multiple studies suggest that the more confident you are in the wrong answer, the more likely you will remember the right answer after you are corrected.

In one study, students answered questions on a quiz and rated their confidence level in each of their answers. Then they were given feedback on their incorrect answers. Researchers discovered that students were more likely to correct their initial errors during a final test if they had been highly confident in them.

Why did this happen? Researchers speculate that students focus more attention on corrective feedback when they are both confident and wrong (and perhaps surprised by their error). They also claim that when a learner expresses confidence in wrong answers, the learner’s second guess may often be the correct answer. When corrected, some students claimed that “they knew it all along.”

Bottom line: If we embrace and even study errors in our classrooms, students may actually learn more. However, there is a glaring caveat here: This only works if students have the emotional resilience to respond to mistakes adaptively and flexibly.

When children worry that they are making too many mistakes or possibly failing at something, the emotional fallout can be difficult to manage. According to UC Berkeley professor Martin Covington, the fear of failure is directly linked to self-worth, or the belief that you are valuable as a person. Covington found that students will put themselves through unbelievable psychological machinations in order to avoid failure and maintain the sense that they are worthy.

“If we embrace and even study errors in our classrooms, students may actually learn more”

In a study of fourth to sixth graders, researchers analyzed students’ emotional responses when they made mistakes and identified three distinct styles. The “distance and displace” style (withdrawing and blaming someone else) and the “minimize and move” style (moving on and looking beyond the mistake) reflected patterns of avoidance. However, students who had the “regret and repair” style (featuring some guilt, normalizing of the situation, and self-care) engaged in less self-blame, participated more actively in problem solving with their peers, and earned greater respect from teachers.

Here lies the larger challenge: How can we help kids to accept their errors and failures, particularly in school, so that they might translate this skill to the real world?

Adjust the learning context: “Let’s try this another way.” In the same study of fourth to sixth graders’ mistakes, emotions, and coping strategies, researchers suggested that the context for learning may be important. Students may find it more emotionally challenging to work in a small group when they’re having difficulty, and may be better served by working privately. So consider providing options to kids who may need a little space to flounder.

Encourage persistence: “Keep trying. Don’t give up!” A 2017 study demonstrates that when adults model persistence in working toward a goal, infants as young as 15 months tend to mimic that behavior. Persistence can be learned. As teachers, we have a lot of power to influence our students’ efforts by sharing our own vulnerability and identifying our own self-conscious emotions, our stops and starts during problem solving, and our commitment to keep going. Students who engaged in the “regret and repair” style of coping still felt guilt when they made mistakes, but they continued to engage and keep trying—while also being gentle with themselves.

Model self-compassion: “Be kind to yourself when you’re confused; it’s okay.” If we model and normalize the ups and downs of learning with our students, we can also share the power of self-compassion. They can learn to think: “This is tough, and I don’t get it. I’m not alone here; other people get confused just like me, and I’m going to cut myself some slack; it’s okay to not know the answer right now. I can be kind to myself and know that I will find my way through this challenge.”

How becoming an Online Teacher changed my life

Getting a job in China: What to know

My Personal View on ESL Online Teaching for kids